Home / Blog / For the sake of the UK’s iconic tree genus, buy British grown trees
< Back to Blog

We visited Holland a few weeks ago and it became apparent that Oak Processionary Moth is massively infested over there. We saw the pupating nests in every village, town, city and roadway we travelled through and we did an extensive tour of the growing areas. The caterpillars of this moth are hazardous to human health in that when they are threatened, they project their hairs which, if inhaled, can bring on symptoms akin to a severe asthmatic attack.

Oak Processionary Moth is already in the London area and the authorities are battling against the spread of this pest. This insect was brought in on imported oak from the continent and government agencies are very worried about its spread. So far the London area is the only one effected and protective zones (ZP status) have been recognised in the rest of the UK where the pest is not present.

As a result of our information gathering and first-hand experience we have decided not to import any Quercus (Oak) from the continent this season as we deem the risk to the country in terms of the spread of this pest is too high and we are urging other nurseries or consumers to follow suit. Fortunately we have good numbers from our own field production to pull from. Oaks that have been grown from acorns collected from UK providence trees. We are not alone in terms of home grown Oak production. There are plenty of nurseries that grow this genus in this country so the reliance on importing and specifying pest threatened stock is annoying to say the least. Stock from the continent can come in with Oak Processionary Moth eggs which are very difficult to detect by eye so the propensity for error is great.

BBC Gardener’s World touched on this issue a couple of weeks ago with an interview between Adam Frost and Prince Charles at Highgrove detailing the latter’s awareness of this threat to the UK tree health as a direct result of importing trees and plants. Well worth a watch on ‘catch up’. In fairness Prince Charles has been advocating action for decades and it is only now when the threat has intensified that his views are being taken into account. The great thing about the exposure brought about by this programme on BBC2 is that it was viewed by over 2 million people. We have been trying to raise awareness for this topic of Biosecurity for years but our voice only reaches a limited circle of enthusiasts.

Ash Dieback disease is old news and means that no Fraxinus (Ash) has been planted in the UK for over 6 years and the threat to our indigenous stock in terms of decline is almost certain. This disease was spread about from trees imported from the continent . It is so depressing that the lesson has not been learned and now the UK now faces a new and ongoing crisis with our most iconic tree, the English Oak. I live in hope that the outbreak in London can be contained and that specifiers and consumers can be alerted in time to raise awareness for this pest to be kept across the channel and not spread to us. 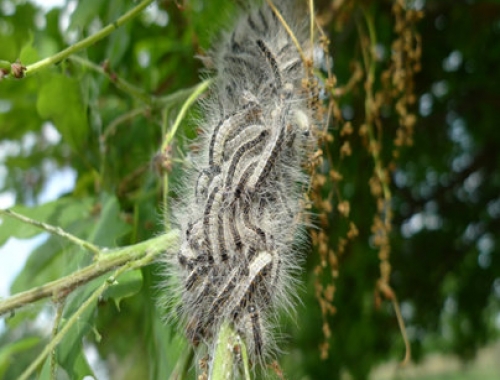