Olive planted in the UK before the arrival of Xylella Fastidiosa into Europe, with a trailing rose growing through it: 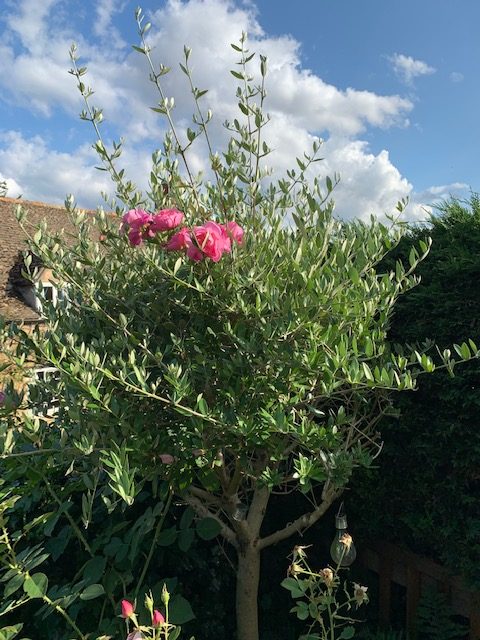 2020 seems to be the year that many of the things we have grown up with are no longer morally acceptable. Take Olive for example, such a glorious tree, unrivalled in what it does aesthetically and so beautiful in structure. However, with the arrival of the plant disease Xylella Fastidiosa into Southern Italy in 2013, the Olive population in this part of Europe was decimated and the production of Olive Oil supporting thousands of families was lost. A lot of tree diseases are genus specific like Ash Die back, but the thing about Xylella is that it also wipes out numerous other genus and particularly favours Laurus nobilis (Bay), Prunus dulcis (Almond), Quercus suber (Cork Oak), as well as the mainstream shrubs Lavender and Rosemary. We took the decision to stop growing and selling these varieties in 2015, not wanting the risk the UK treescape and our own production for short term commercial gain.

Xylella Fastidiosa has now been spread to Germany, France, Portugal and Spain but thankfully there has been no recorded case in the UK,….yet.

There are still many plant brokers importing Olives into the UK, at great risk to our environment, driven on by demand from specifiers and individuals who have no idea of the catastrophe that could so easily result. I am pleased to say that DEFRA is getting a grip on this and making it a lot harder for Olives to come into the country but I will rest easier when they are prohibited for good, along with the other host plants it favours.

But there is another side to this. The beauty of Olive was in its size. A gnarled old specimen was a very attractive addition to a south facing garden. With climate change so obviously upon us, the question we now have to ask ourselves about the trees we buy is how much environmental gain are they going to achieve. The thought of buying a 100 year old Olive that has been transported all the way from Italy or Spain with a huge carbon footprint attached is not going to be a contributor.

Over recent decades there has been a great emphasis on a ‘day one’ instant impact look with the sizes of tree grown and despatched going off the charts. Some trees are so big that only one or two fit on a 40 foot articulated lorry that travels thousands of miles to reach their new homes. There is no environmental gain in these also. The trouble is that this obsession for size has been transposed across all genus. It’s fair enough to buy a tree at semi mature sizes if they go on to live for at least two centuries but what’s the point of buying semi mature Malus (Apple) or Prunus (Cherry) as these only live for about 70 years in the first place. In environmental terms its like starting to invest in a new Olympic athlete when they just turn 40. What is more, a short lived tree planted at huge sizes has lost its juvenile vigour and reacts very poorly to this process giving the end user a miserable result rather than the utopian day one orchard they had been promised and imagined.

Personally I don’t see the point in planting a tree that has a life expectancy of under 100 years at much over 16-18cm girth. By then it is about 10 years old so it still has 90 years’ worth of environmental contribution to go. Better still buy these from a nursery who has grown them from scratch rather than an imported tree with a hefty carbon footprint already attached. For longer lived trees there is a good case for planting at semi mature sizes but surely in this day and age when our environment is at such a knife edge, not at the super-sized girths of 40cm plus that need large machinery to transport and plant them, negating all their environmental worth from the start.